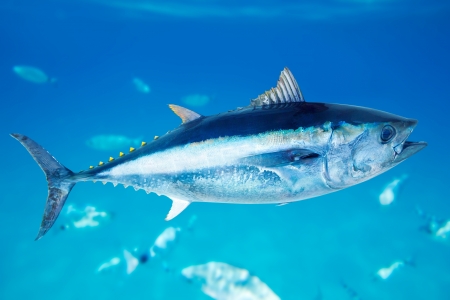 Tuna has been and remains one of the most popular forms of sport fishing, due to the excessive quantity of these saltwater sports fish as well as the quality of the meat. Not only that, but these fish are far less lucrative than some species, and techniques remain fairly constant between different breeds of tuna. All of these factors add up for a successful and enjoyable angling season with these guys.

The tuna fishing season generally starts in June with bluefins and albacores appearing in the warm waters of the Pacific ocean. Often found just offshore (between 40 and 70 miles off the coast), tuna can be located by using solar markers, jig trolling, or the feather method.

Additionally, some fishermen just follow where the birds are hanging around, and this will often lead to a catch. Again, these techniques generally hold true between types of tuna, so don’t spend too much time researching breeds, just stay focused on the tender tuna sandwich which will be on your plate after your first successful catch!

The most commonly used rig is a standard 1/0 or 2/0 hook, depending on the size of the tuna you’re interested in finding. A fluorocarbon leader is preferred by many anglers; also, a fresh line and finely-tuned drag system are an absolute necessity.

After that, all that is needed is a strong and long rod and some proper bait. Good chumming technique is also important; after a tuna goes for the troll rod, it is crucial to move quickly so as to keep the tuna around and to avoid its escape. 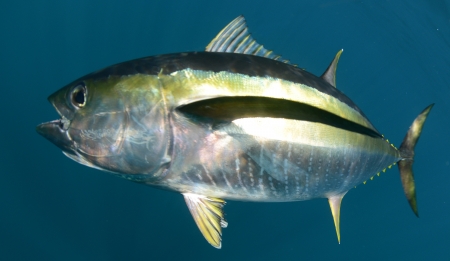 Expert tuna anglers at Newport Landing have this to say: “Trolling will usually start the day off and the captain will say fish on when a tuna hits one of the troll rods. At this point, the boat will slow and chum will be thrown to entice more tuna to the boat.

The key tactic at this point is to get a bait in the water and away from the boat as quickly as possible.” The method is simple enough. The difference between success and failure lies in the ability to coordinate the crew and act quickly as needed. After that, the rest is just luck. Every group has good and bad days, but during the fishing season, with proper gear and action, at least one catch is more than possible.

Tuna sizes vary widely. While albacore tuna average about 73 lbs, Atlantic bluefin can break through the 800 lb margin. It is quite extraordinary to see a fish of this size, but it happens. Skipjacks and mackerel are on the smaller side, approximately 40 and 20 lbs, respectively. Base your line choice and amount of bait accordingly depending on the size of the beast you’re interested in netting. Besides that though, the same technique will usually lead to success.

Its crazy how much a huge tuna fish can land you when you catch the big one. Prices for some tuna hit record highs in the last couple years although they are starting to come back down now. Back in Jan of 2018 a Bluefin Tuna went for a cool price of £238,000 to a sushi restaurant chain in need of some tuna fish by the looks of how much they paid for a 405 kg fish.

It is now time to charter a boat and get out on the water. Tuna fishing has been a great pass time as well as a choice method of catching some dinner for thousands of years, so why stop now? Catch a big tuna and send it over to the Tokyo fish market fast.  Best of luck!