(Pee U Stinky its so bad) 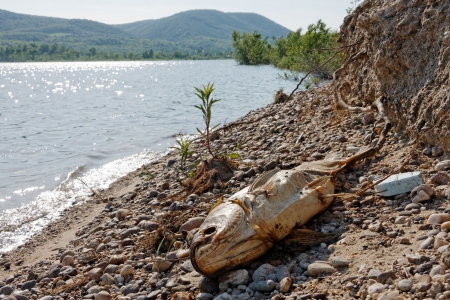 Three friends were fishing through the coast line, and suddenly they caught a sealed jar.  They were so much curious and glad to have some excitement as they just finished telling as many bad fish jokes as they could. opened the jar with excitement and fear. And surprisingly a mermaid came out of the jar and offered them one wish each.

So the first friend said: “Make me the president of USA and I want to live in White House” so the mermaid did it and to his surprise he found himself in White House.

The second friend was very excited and said: “Make me a palace of dollar in Las Vegas” so the mermaid did and amazingly he found himself in Las Vegas surrounded with chicks.

The third friend was so much impressed and within a second a naughty plan hit upon his mind. He asked the mermaid to bring his two friends back to him. So the mermaid brought them back in their old ship.

Fish  Jokes to stink up the place

The Mermaid and Little Jony   Yack! Its Foul…

It’s the beginning of summer season. Jony’s is off for a month. So he visited his grandpa’s house. You should know that his grandpa was a legendary fisherman who caught a giant trout the likes of that the world had never seen.

So Jony after just meeting his grandpa after such a long time apart from each other and eager to hang out with grandpa and fish made a note for going to catch some fish first thing in the next morning.

Jony was to thrilled to sleep, he arose up early in the morning and went to his grandpa’s store room where Grandpa keept his hooks, net, bait and other fishing stuff. Suddenly Jony noticed an old antique on the shelf. His curiosity to know what the heck it was got the better of him. He took it and unfortunately it went off his hand and wihin a second a strange lady came out of it.

Jony: What the hell is going on?

Jony: Who are you?

Mermaid: I am the queen of the Mermaid and one day while I was swimming through the coast line your Granddad captured me and from then on I have been living in this antique.

Jony: So if I make you free will you kill me now?

Mermaid: Of course not, you gave me freedom. so in return I make your one wish come true.

Jony: Well,  give me a job that gives me money and companionship of lots of girls.

Mermaid: So the Mermaid did it. She made him the bus driver of Barnard College.

Rotten Fish Jokes so Bad you will cry

Jim is commonly known as Fish boy at his school. He always writes his compositions about Fish, no matter what kinda composition he asked to write. So the teacher  was quite mad at him for this and he decided to teach Jim a lesson.  The next semester he made Jim Write a short composition on the second world war.  The teacher went up close to Jim and whispered….now lets see how the heck you use fish in your composition this time!

As usual Jim finished his 1 hour before the time was up and the teacher was eager to read his paper. What Jim wrote was this

Second world war was a dangerous war in  history at that time a nuclear bomb fell in Nagasaki and a lots of people died. That bomb also affected the water of Nagasaki. In that water lots of fish used to live. Fish is a beautiful creature and love it. Fish swim very nicely, I love to hook fish, I brush fish with teeth ………………………………………………………. So we should take care of fish.

Teacher: Well, tell me five fishes names that live in the ocean.

Jim is rockZ Fish Boy Your Hooked by him

Fish Jokes so Rotten dumb you should not bother reading it

Jim was reading Bad Fish Jokes on Sheepshead Fishing Blog while on his phone and unfortunately he got an emergency call from nature. But at that time he was deep into the depth of the story, so he headed to the toilet with his mobile phone in hand and he continued reading the story there. The story was:

“Once upon a time there lived a poor fisherman. One day he was angling in a river.  Suddenly his rod went off wildly into the water leaping from his hand. But the man didn’t know how to swim so he could not get his hook back, and sitting near the river and crying like a child a Magic river fairy heard his crying and took pity on him. She decided to help him but before giving his hook back she wanted to test his honesty.

So she came out of the river with a golden hook and asked this poor fishing soul… poor man- is it your hook? The fisher man was very honest and replied no, its not my hook. Then the fairy again came back to him with a silver hook and asked- is it your hook? The fisherman replied no, its not mine. The fairy dove into the water for the third time and came back with his original hook, that is made of simple bronze and when she asked him yet again whether it was his hook or not, he replied- yes it is mine. The fairy was then surprised by his honesty and offered him all three of the hooks.

As soon as Jim finished the story, his mobile phone went off his hand and landed into the loo. It was his expensive and beloved Iphone 6 so he started crying. Then a magic toilet fairy took pity on him and came out of the loo with a golden Iphone. She asked Jim-is it your phone? Jim remembered the story of honest fisherman and replied that- no Its not my phone  but the fairy then told him- dont you be stupid, just wash it off and then you will see its your phone after all and not a golden one.

I told YOU. Rotten Fish Jokes…lol….You will never get that few minutes back again.

Link to Us at Rotten Fish Jokes, Just Because they are so bad and people read them!

Copy and Paste this code to your html