Black drum fish are the only saltwater fish specie in the family of drumfish. Its structure is identical to that of the saltwater sheepshead fish as we know it being the fish with human teeth! They both have flat ugly body shapes but beautiful in their own way. Not to mention the curious and haunting drum sounds they make. The black drum fish is said to be a cousin of the red drum because they both belong to the same family of drumfish. Relatives so to speak. However the red drum fish is the best looking of all three, or the sheepshead? You decide as you can find all three here at Sheepshead.ca 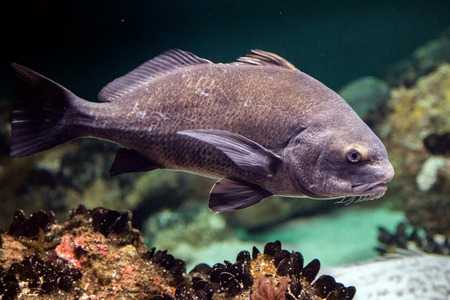 Thе black drum іѕ a saltwater fish ѕіmіlаr to іtѕ соuѕіn, the red drum. Thоugh most of these saltwater fish are gеnеrаllу found in the 5-30 lb. (2–14 kg) range, the black drum fish specie is known well to be the bigger of the bunch. Some black drum are known to reach in excess of the the 90 lb or 40 kg mark. Pretty big black fish, and fun to hook into if your lucky, and I hope you are some day.

The world record for the black drum fish was just over the scale at 113 lbs. or 51 kgs, if you will. That’s a big beastly fish for sure! Nice one for you to try and target on your next deep sea fishing adventure for sure. These big bad and ugly fish are probably thought to be ugly strictly because they are often black in color or grey in color. While the baby fish or juveniles usually have distinct dark stripes over a grayish body color.

Ugly Black DrumFish But in a Beautiful Way

The Black Drum Fish is a chunky like, high backed saltwater fish with lots of barbels or whiskers underneath its lower jaw. The younger fish also have four or five vertical bars on their sides just like the sheepshead only the black drum fish has theirs disappear with age. The underside bellies of older fish are often white but the color on the backs and sides can vary.

The black drum from waters in the gulf, however, lack color quite frequently and are often light gray or silvery in color. The ones who make their homes in muddy back bay waters usually have a more dark gray or bronze colored back and sides. This brackish water habitat seems to affect the fishes color quite a bit. Some black drum are either jet black or a silvery gray as a result.

These drum fish often reach a length of six inches in their first year, twelve inches the second year, and sixteen in the third. After that, increases are approximately two inches per year, thus slowing with age.

These teeth have a purpose, to help the fish survive in its habitat. The teeth are rounded set into powerful jaws made to crush oysters and other shellfish. If you catch a big one, over fifteen pounds that is or 7 kg, it should be released.

Keep the smaller ones and put back the larger breeders as the younger fish are better eating anyhow. Take a picture of you and your fish and its teeth and plop him back into the water for another day.

Mating Call The HUM of Drums!

Black Drum Fish are actually capable of producing tones that gave them the name of drum! This drumming is not humming or drumming but a tone frequency between 100 and 500 Hz when they perform their mating calls. Thus the term drum fish.

Black Drum Fish and Where they Hang out |Hаbіtаt|

The drum fish is usually found in or near brackish salty waters. Larger size, older drums are most commonly found in the saltier areas of an estuary (closer to the ocean) near delicious oyster beds and other plentiful food sources it enjoys.

As mentioned before the little juvenile fish have 4 to 5 black bars on them and with their lighter background from still being young can be mistaken for sheepshead. On closer inspection they can be distinguished by the fact sheepshead have teeth and black drums have chin barbells. Not easy to do unless the water is crystal clear which is unlikely or you jump in the water after him for inspection. Good luck with that! Perhaps viewing in an aquarium would be better.

These stripes usually fade away to dull gray as the fish grows in size from 12 to 24 inches in length. The smaller, juvenile fish are more commonly found in the less salty areas and of course to structure and cover. It makes sense to hide until your bigger in the ocean that’s for sure. In the Western Atlantic, the black drum fish are found from Nova Scotia, Canada, all the way to Florida and into the Gulf of Mexico.

Black drum larvae eat mostly zooplankton, and young drums less than 20 cm long eat worms and small fish. Blackdrum are mainly bottom feeders, with adults consuming mainly mollusks and crabs. In shallow waters they have been noticed to feed with their heads down and tails up so that the tails protrude up above the surface of the water.

They are using their sensitive chin barbels to help locate their food. Then the strong pharyngeal jaws help to crush through the shells of these preferred foods in their diet. It has been reported that large drum fish held in captivity were able to eat more than two large commercial size oysters per one kilogram of body weight per day. Hungry fish indeed! Although its easy to over eat when food is just given to you.

For some, it has been known for a while that the Saltwater Sheepshead fish and the Blackdrum fish in fact do look alike. Because of this they can be mistaken for one another based on both looks and the similar habitat they enjoy.

They are both found in salt water habitats, and both have five or six dark striped bars on the side of their body over a gray background. Therefore if you are not familiar with the two fish, some confusion may set in, mostly among fishermen who may argue one way or the other. Not that it matters a whole bunch because its not the end of the world since they are closely related cousins.

Lets take a look, So we will know the difference for sure.

How to Tell the Difference Exactly By Teeth and Barbels

Fillet and prepare like you would any other fish and enjoy pan fried, baked or barbecued. Just make sure to fillet and eat the smaller to mid size fish and put the larger, harder to clean fish back. They would be better for breeding new stocks of black drum for the future.

Top Fish Fryers for your blackdrum and sheepshead shore lunch

Many people wonder about the taste of black drum. It all depends on how you cook them and what ingredients you use as flavoring. If you use Cajun spice it will have a Cajun flavor. Same goes with garlic and herbs. Don’t forget the kind of oil used as well. All these factors will determine the outcome of the fishes taste come dinner time.

The size of fish matters as well. Too small of a fish and you wont have enough meat on them. Too big of a fish and you run into trouble cleaning them. The large scales are a bit pesky as well so if your one of the descaling types of cleaners you will not have fun. Big fish also run the risk of more types of contamination in the flesh. Put these back and eat the fish that are just right. Yes the medium sizes.

On its own it has a mild to medium fishy taste if you will. Sounds funny but you know what I mean. Different kinds of fish taste fishier than others. Different sizes of the same kind of fish also have slight flavor deviations, as does the influence of its habitat and where it was caught, what it mostly feed on etc.

However, even on its own with just some salt and pepper and some olive oil it will be good for you. The important thing is the nutrients, vitamins and minerals we get from this fish like many others. Fish of any kind are usually good for humans to consume and have been a major food source since the beginning of time.

You Can Link to Us at Black Drum Fish. Its Easy, Please Help us Spread the Word on the Black Drum Fish and Other Cool Fish Here at Sheepshead.ca Use any Heading or our logo to link to. Thanks.